The Irish Sun newspaper (“Something for the weekend” – 12-08-2011)  talks to Gavin Friday about ‘catholic’, Irish family relationships and his upcoming gig at Electric Picnic.

On Irish fathers: “I started writing a lot after the death of my father. Coming from an Irish background family relationships can be strange. Over the generations there was a lot of conflict with fathers and their sons. I didn’t get on great with my own Da. He didn’t understand me and we had this sort of war. “These Irish men didn’t know how to show compassion or love to their own children so it was like this monkey on yer back. But when they’re gone, you go `Wow, is that what I was fighting against? Was that what was driving me?’ That experience had a profound effect on me, but not in a negative way because these are the people who bring you into the world. But the truth is that most of them love their children, they just aren’t very good at showing it. They had the Catholic Church lashing them around the head for decades. Then our generation came along and suddenly started talking back.”We weren’t looking at the Catholic Church or any government for guidance. We were listening to David Bowie and the Sex Pistols, so you told yer Da to `fuck off’ and they thought that we were from outer space.”

On Electric Picnic: “I’m very nervous on one level but then again, I’m very excited. “Although I’m glad I’m playing in a tent. I think music should have a roof on it. I’m on about 9.30pm on the Friday but I don’t think there will be a lot of the Catholic material in the set. I’m looking at dipping into the last 20 years of my career, I might even open with a revamped Virgin Prunes song.”

(thx to John for the photo & ocr scan) 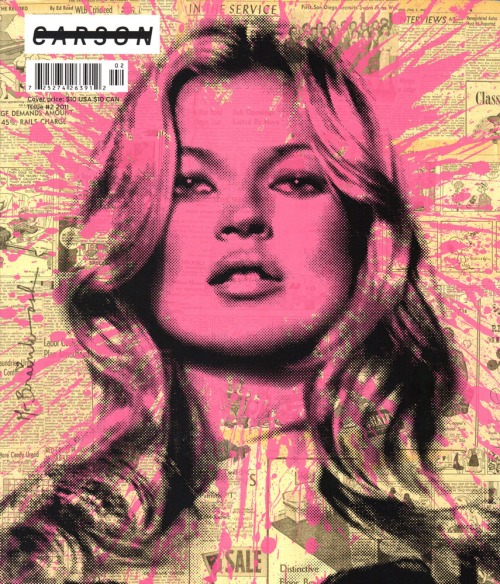 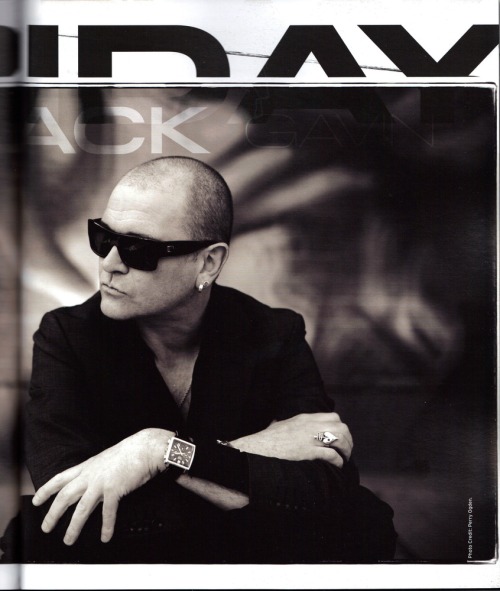 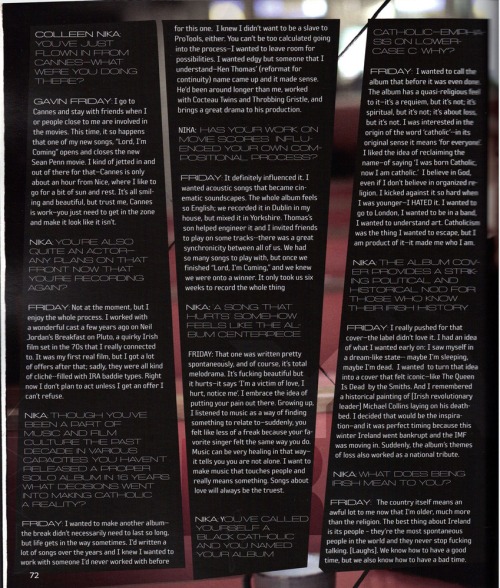 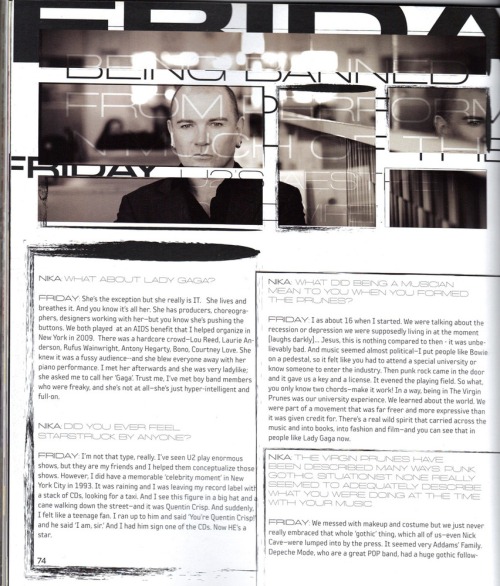 See the full gallery on Posterous

A 7-page Gavin Friday feature/interview in ‘Untitled Magazine‘ (previously known as Carson Magazine – the drama surrounding the name change is amusing – Google it…).

Colleen Nika asks Gavin what decisions went into making ‘catholic’ reality and whether his work on film scores influenced the compositional process:

“I wanted to make another album – the break didn’t necessarily need to last so long, but life gets in the way sometimes. I’d written a lot of songs over the years and I know I wanted to work with someone I’d never worked with before for this one. I knew I didn’t want to be a slave to ProTools, either. You can’t be too calculated going into the process – I wanted to leave room for possibilities. I wanted edgy but someone that I understand -Ken Thomas name came up and it made sense. He’d been around longer than me, worked with Cocteau Twins and Throbbing Gristle, and brings a great drama to his production.”

“It definitely influenced it. I wanted acoustic songs that became cinematic soundscapes. The whole album feels so English; we recorded it in Dublin in my house, but mixed it in Yorkshire. Thomas’s son helped engineer it and I invited friends to play on some tracks – there was a great synchronicity between all of us. We had so many songs to play with, but once we finished “Lord I’m Comin’; and we knew we were onto a winner. It only took us six weeks to record the whole thing.”

A positive 7 out of 10 from France’s Hard Rock magazine: “With his voice and velvet arrangements, Gavin Friday envelops the listener and caresses them as if he’s pacifying his own evils. It’s a beautiful “crooner” CD which in the end is crowned in bliss by the Nick Cave-ian “Lord I’m Coming”.” 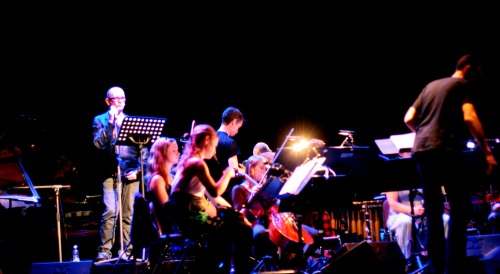 See the full gallery on Posterous

Some pictures and memorabilia of the Reich Effect show in Cork with Gavin Friday and Crash Ensemble. No pics during show – so it’s rehearsal and soundcheck only. Great response from the crowd – both Iarla Ó Lionáird (who performed the stunning Grá agus Bás – get it on iTunes!) and Gavin got much kudos for their performances afterwards in the bar of the Cork Opera House. This was the second time Gavin performed “Coming Together” with the Crash Ensemble and since its first performance the piece has gained intensity – Gav went for it this time. We left the venue with a spring in our step, invigorated, secure and ready…

Full text of Rzewski’s Coming Together:

“I think the combination of age and the greater coming together is responsible for the speed of the passing time. It’s six months now and I can tell you truthfully few periods in my life have passed so quickly. I am in excellent physical and emotional health. There are doubtless subtle surprises ahead but I feel secure and ready.”

“As lovers will contrast their emotions in times of crisis, so am I dealing with my environment. In the indifferent brutality, incessant noise, the experimental chemistry of food, the ravings of lost hysterical men, I can act with clarity and meaning. i am deliberate–sometimes even calculating–seldom employing histrionics except as a test of the reactions of others. I read much, exercise, talk to guards and inmates, feeling for the inevitable direction of my life.”

Find out more about Sam Melville, who wrote the words used by Frederic Rzweski.